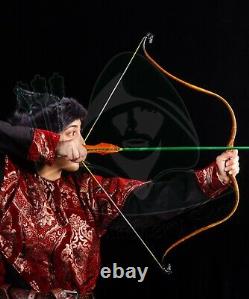 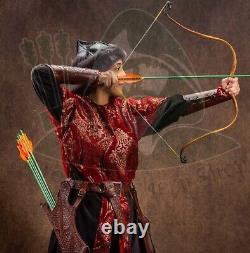 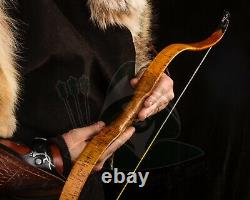 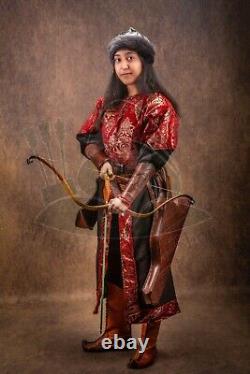 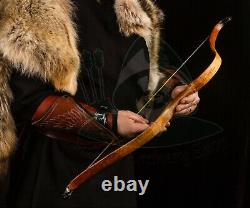 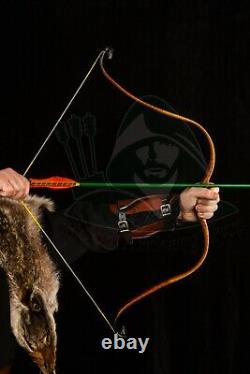 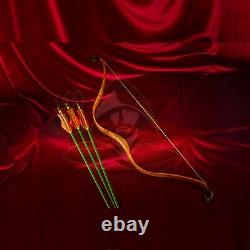 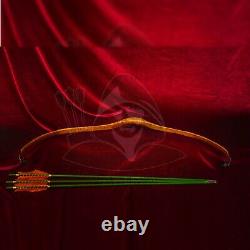 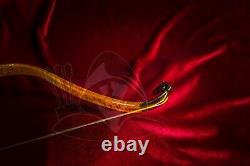 It's a professional mini Scythian short bow for sale, we research to examples of the history and made it, its handmade all-resin bow, which is not neglected in terms of speed and aesthetics, as well as its robust and user tolerance. Its usable for target archery, horseback archery(mounted archery), its have great performance please check review video. It's covered with leather.

It's able to use beginner and professional traditional archers. (it will be delivered to 2-4days for the USA). Painting is not the same %100 like a photo please message me for types. It's promotion price for this place, I will increase the price. Historical view(Scythian Bow Replica). One piece of monolithic tree, the probability of breaking is too low compared to other publications. Notch To Notch Length:100 cm/(39,37 inches). Bow Lenght Without String: 84 cm(33 inches). Bow Lenght With String: 86,36 cm(34 inches). Bow String Lengh : cm(inches). GIRA TYPE: 3-piece Ottoman-Asian style. Safe Draw Lenght: 69.8 cm.

What Are The Advantages Of Mushroom Material Compared To Leather. The mushroom coating prevents speed loss compared to leather coating and reduces the friction damage caused by arrows on the spring while being thrown. But's except bad using like that. Hitting hard objectshitting on stone etc.

Editing to bow surface(cutting or using some chemicals). Türkdora, Sa'dac beams after the rope in the world will be liked very much, two kirii, two winding rope, including four different products, my brand Hncal and KAYA Sport in partnership with the World will take place among the archery products. The features of these products are briefly; yellow with a special coating against abrasion, abrasion 14 times reinforced dyneema gray, while teflon coated dyneema ie not wetted, surface and air friction no less.

Both of these products are available as beams and winding threads. What is the Recurve Bow?

A recurve bow is a bow with limbs that curve away from the archer when unstrung. A recurve bow stores more energy and delivers energy more efficiently than the equivalent straight-limbed bow, giving a greater amount of energy and speed to the arrow.

A recurve will permit a shorter bow than the simple straight limb bow for a given arrow energy and this form was often preferred by archers in environments where long weapons could be cumbersome, such as in brush and forest terrain, or while on horseback. Recurved limbs also put greater stress on the materials used to make the bow, and they may make more noise with the shot.

Extreme recurves make the bow unstable when being strung. An unstrung recurve bow can have a confusing shape and many Native American weapons, when separated from their original owners and cultures, were incorrectly strung backwards and destroyed when attempts were made to shoot them.

Terminology of Recurve Bow's. Where the arrow rests during draw. These may be simple fixed rests or may be spring-loaded or magnetic flip rests. The face of the bow on the opposite side to the string.

The place on the bowstring where the nock (end) of an arrow is fitted. The rigid centre section of a bow to which the limbs are attached. The cord that attaches to both limb tips and transforms stored energy from the limbs into kinetic energy in the arrow. A strap or cord attached to the bow handle, wrist or fingers to prevent the bow from falling from the hand.

A protection for the digits that draw the string. Also provides better release performance.

The difference between the limb-string distances measured where the limbs are attached to the riser. Usually the upper distance is slightly more than the bottom one, resulting in a positive tiller.

Reflects the power-balance between both limbs. The Turkish bow is a recurved composite bow used in the Medieval Ottoman Empire. The construction is similar to that of other classic Asiatic composite bows, with a wooden core (maple was most desirable), animal horn on the belly (the side facing the archer), and sinew on the front, with the layers secured together with Animal glue.

However, several features of the Turkish bow are distinct. The curvature tends to be more extreme when the bow is unstrung, with the limbs curling forward into the shape of the letter "C". With some bows, the rigid tips of the limbs ("kasan") even touch.

The grip area is not recessed like other Asianic bows and is fairly flat on the belly, while the front of the grip bulges outwards. The dramatic curvature of the bows makes stringing them very different from straighter bows found in Europe.

There is an old saying in Turkey that there are "120 ways to string a bow, " though the most common methods involve sitting on ground with one's feet pressed against the grip. Heavier bows usually require the use of a long, looped strap called a "kemend" to pull the limbs back and hold them while the string is seated. In 1794, in a field outside London, the Turkish ambassadors secretary used a Turkish bow and arrow to shoot 415 yeards, partially against the wind, and 482 yards with the wind. He said on a plain near Constantinople pillars were located that commemorate distances of 800 yards achieved with Turkish bows and arrows in ancient times. For many years the excellence of Turkish bows could be seen from historical records. In 1910 an archery contest was held on the beach at Le Touquet, France, where Ingo Simon was able to shoot an arrow 434 m using an old Turkish composite bow requiring a force of 440N or 99 lb. Like many other Eastern archery styles, Turkish archery uses a "thumb draw, " employing a type of grip called mandal. This grip prevents the arrow from moving if the archer is on a horse and/or firing at an unusual angle.

The draw itself is relatively short, usually under the chin or by the cheek, compared to archery styles in China or Japan where the nock is pulled past the head. When the arrow is released, the draw arm is kept relatively steady rather than allowing the arm to swing backwards. Turkish archers developed several unique techniques to aid in combat. One was the practice of holding several arrows in between the fingers of the draw hand, allowing fast repeat shots.

Another was "Jarmakee" which involves drawing the bow with the draw arm going behind the head so as the fire at a steep downward angle. This was used to fire from atop walls down at enemy troops. Mounted Archers of Archaic Turks.

Some authors believe that Turks originated from Huns, but the word Turk was first mentioned in Chinese sources in the 6th century for a Turkish nation called Blue Turk Empire (Gokturks). Although the archaic Turkish archery has not been very well documented specifically, the information about the steppe people gives an idea about it. Other than old Greek, Roman and Byzantian scripts, archaeological excavations made by the former USSR scientists enlightened many points of the nomadic life and culture.

Despite the fact that there are different kinds of nomadism, in the current context, nomads are pastoralists who follow their animal herds, as they search for food and water. Nomadic steppe peoples were tribal or clan-based entities and their leaders achieved their status and political power by their personal abilities.

The unification of tribes of different ethnic origins under the commandement of such leaders was not rare. Cultural, genetic and military interactions made it possible to talk about a common mounted archery culture which can easily be representative for early pre-Islamic Turkish horseback archery. This cultural complex, widely known as Scythian Triad, is typical with the content of their tombs: weapons made of bronze and iron, equipment of horsemanship and the so-called animal-style art. Warriors were burried with their weapons and horses, so the tombs offer great information. The earliest written sources of other cultures about the steppe folks were dated to the first millenium BC and these steppe people were referred as Scythians, as named by Herodotus or Saka, as called by Iranians.

After the Scythians, historically we next encounter the Sarmatians who came as aggressors and finally occupied all Scythian land. Both groups of steppe people were speaking Iranian languages (at least their leaders were) and closely related to the Medes and Persians who themselves originated on the steppe.

The Scythian culture became widespread among Altai people from which the Turks come from. 2 Unpaid item case will be opened if the item is not paid after 4 days. 3 If the item is defective or not as described, we will take the responsibility. 6 We accept the return within 30 days after you receive the item.

We will do our best to resolve your issue until your satisfaction. We will reply within 24 hours on weekdays. We promise to help you solve the problem well.

The seller is "hoodarcheryshop" and is located in stanbul. This item can be shipped worldwide.